The final installment of our Into the Deep series.

Posted by Kyle Burkholder at 2:40 PM 10 comments: Links to this post

Stef and I try to get out when the weather is nice and enjoy Bella at her awesome age. For Bella, everything is worth talking about and everything is very exciting - we even had a spontaneous dance party at the Zoo this week.

Fridays hold some of my favorite family memories and this week was no exception.

Posted by Kyle Burkholder at 4:20 PM No comments: Links to this post

Posted by Kyle Burkholder at 8:36 AM No comments: Links to this post

Deeper Into "40": A Sunday Morning Metaphor

When planning out a church service at Grace Point, we often add songs, video clips, or other elements to help raise key themes or hammer home the message of the day. It is hardly edgy in the American church in 2011 to play a movie clip or a pop song, yet there are often little surprises hidden in those elements, little messages within the messages.

This past Sunday, I had the band play U2's "40" after my sermon as a way to close out the day and reiterate the main idea of the day - we have to focus on God and push out all of the distractions offered by the world. U2 asked the closing question for me: "How long?".

As part of the "punch" of the song, I had each of the musicians peel off one by one during the song.  First, our Worship Pastor finished singing and exited, then the electric guitarist played a few final licks and walked off.  Finally the bassist made his way off the stage, leaving only the drummer, playing starkly by himself, isolated as the only point of action, the sole area of focus in a dark and static room.

For an idea of how this worked (and where I plainly stole the inspiration) check the below video - the walkout begins about 9:00 into the clip.


I think most people caught the main message. After all, "How long?" was sung and plastered on the screens, which then silently dismissed the crowd as the final drumbeat sounded, leaving a moment of absolute silence before the lights came back up.

I wonder, though, how many people caught the deeper symbolism.

Notice the way that the musicians slowly peel away in the video above?  They were (as ours were Sunday morning) metaphoric distractions and distortions that distract us from the "main thing" in our lives.  As they leave the stage, the sound becomes simpler and our focus is narrowed, until it is finally honed in on a sole musician.  The drummer is the final resting place for our attention.

As in life, less can be more, and focus is easier as we sweep away distractions.  Did you catch that on Sunday?  We artistically (and hopefully very subtly) tried to illustrate the whole point of the morning in the final 6 minutes.  "Keep your eyes on the MAIN THING...peel away the layers and learn to focus."  If the drummer was the "main thing", we only began to really notice him and pay attention to him as all of the other parts (some much flashier and more prominent) disappeared.

What would those parts, those layers, be in our lives?  What obfuscates your view of God?  What steals attention from Him?

There aren't always so many layers to what is going on during a given Sunday morning.  Sometimes a song is just a song - and usually that is all it needs to be.  This Sunday, however, our "Into the Deep" series took us just a bit deeper...even if we didn't notice it the first time around.

Posted by Kyle Burkholder at 6:08 PM No comments: Links to this post

What Would Make Jesus Wear This...? Posted by Kyle Burkholder at 11:13 AM No comments: Links to this post

Seize The Day from Grace Point Church on Vimeo.

Posted by Kyle Burkholder at 7:34 PM No comments: Links to this post 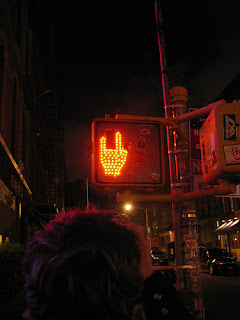 Posted by Kyle Burkholder at 8:53 AM No comments: Links to this post